How Can This Be? 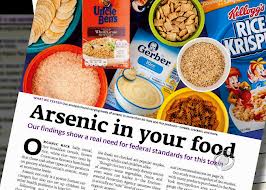 Has everyone in this world today gone crazy, first we had China sending poison painted toys over here for us to buy and our children to chew on.  And then it was pet food.   Now we find that our own government regulators are allowing farmers to use arsenic in our food…I would have assumed it was coming from China but wait until you read where in the US this is coming from below.

(NaturalNews) As a follow-up to an investigation it conducted earlier in the year on arsenic levels in popular fruit juices (http://www.consumerreports.org), the consumer advocacy groupConsumer Reports has released a new report about arsenic levels in rice and rice products, the findings of which may come as a surprise to many. It turns out that virtually every rice product on the market today contains detectable levels of toxic arsenic, including many “all-natural” and organic rice products.

After conducting tests on more than 200 samples of rice products, which included dry rice, infant cereals, hot cereals, ready-to-eat cereals, rice cakes and crackers, rice flour, rice drinks, rice syrup, and rice vinegar, Consumer Reports investigators found that every single sample had detectable levels of both organic and inorganic arsenic, the latter of which has been shown to cause cancer. In most cases, the worst offenders were rice products made from rice grown in Arkansas, Louisiana, Missouri, and Texas.

And Who Is Doing This To The People Of The World?